Masry Asly “Pure Egyptian” is the name and the theme of our Itinerant Film Festival (MAIFF).

The idea is to present to the audience films about Egypt, made by Egyptians or produced in Egypt, in order to highlight the independent productions and give the talented filmmakers the opportunity to screen their work in different locations around the country.

Moreover, the festival aims at creating cultural opportunities for audiences outside the main Egyptian cities, proposing them a selection of independent Egyptian films that usually are not screened in cinemas.

The second edition of the Masry Asly Film Festival is taking place in Cairo, Damanhour and Aswan and will grant the young talented winners of the competition section with a residency at the Binger FilmLab, an Amsterdam based, international talent and project development centre for feature and documentary films.

The Festival is structured in two sections:

Masry Asly Competition: 24 Egyptian short features and documentaries are part of the competition. The festival will assign two awards: the Jury award and the Public Award.

Eyes on: this section is dedicated to 6 short features and documentaries that tell stories about Egypt.

The dates and locations of the Festival are:
15-18 March  in Cairo @ Artistic Creativity Center and Cinema Hall – Hanager Arts Center
25-26 March in Aswan @ Culture Palace
15-17 April in Damanhour @ Opera House 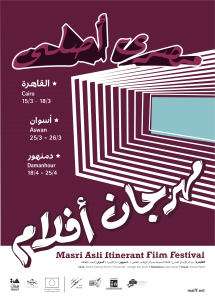