Writing with the other hand is imagining is a group show choreographed in two studies of assignments, talks, workshops and artworks. How can we learn to construct, not instruct? Can the dominant be untaught? How do we challenge indoctrination? We perceive and we listen, we see before we name things, before we speak, read, and write. Each artist in the exhibition inspires different ways to derail the contours of typecast forms and narratives, and traces out new approaches to learning and self-organizing knowledge. Study One taxes the normative standards of utterance, sifts through constellations of community, explores the dynamics at play within the institutional space of higher education and challenges the demand to negotiate the politics of art practice through language.

In a pink wall-painting with a black handwritten statement infiltrated by an eye-catching red negation, we are told that An Artist Who Cannot Speak English Is No Artist. Here, colours are connotations of alternative ideologies: pink stays for Capitalism, while red is the sacred symbol of Communism, though its intensity also evokes love and blood. In this work Mladen Stilinović warns the artist of the impossibility to resolve the conflict between the two grand narratives of the XX century (whose awkward proximity is reflected in the likeness of the colours), while highlighting the authority of the Anglo-Saxon culture in certifying the value of an artwork outside the frontiers of a specific country. Statements are poetry in Luis Camnitzer’s series of Assignment, where riddles deliberately fluctuate between an abstract and poetic lyricism and a contextual engagement with the reality of life. Whereas educ iation is often understood as being about learning a set of instructions, Camnitzer suggests to appropriate art as a means to interact with, observe, posses the world through our own intuitions and ideas.

In Elizabeth Birthday is on the third Thursday of this month by Dina Danish, part of her on-going project Tongue-Twisters Studies, the impossibility of the human pronunciation of a tongue twister is overcome by its enactment. At the core of the work lies the emphasizing of the necessity of finding alternatives to the utterance, resulting in a dadaistic demystification of our most basic and apparently innocent linguistic habits, highlighting how they intertwine with social and institutional practices. Katarina Zdjelar in the Perfect Sound portrays a young man mimicking the exercises put forward by a British speech therapist to remove his foreign accent - sounds lacking verbal meaning, lullabies for the yet to become. Zdjelar prompts how the pitched process of appropriating the standards of global communication entails gradually erasing our identity through empty reiterations with which to achieve homogenization.

Neither Forever Nor Instant by Parallel Lines (a documentary project led by artists and writers) explores the affect of identifying with a movement, the interval between moments of political action, and the suspension of subjectivity in historical time. For this work they collaborated with FIERCE, an organization led by queer youth of color, whose activism in the West Village and the piers have engaged the queer histories of these neighborhoods, and redirected their urban development. The video draws from FIERCE’s West Village Walking Tour, where members, allies and donors are introduced to sites with historical and political significance for community organizing and future sites of action.

The dynamics at play at the legendary and highly influential California Institute of the Arts are explored in Redmond Entwistle’s Walk Through. Combining archival material and present day footage, the film revisits some key moments of CalArts past – in particular Michael Asher's Crits, intense ‘Post Studio’ group sessions in which the students discussed each other’s projects – in order to operate a critical analysis on the methods, purpose and cultural value of artistic education.

Writing with the other hand is imagining Study One looks at notions of learning and educating through the prism, the weight and the role of language (intended as a system of accepted codes and habits) in defining, shaping and ultimately leading human’s capacity for thought, and action.

On the opening night Beirut launches the print vol.0, a one-off print edition by Mada Masr that expounds notions of making sense in the realm of news production, where layers of consciousness unfold between the breaking, witnessing, writing and analyzing of events. The print is commissioned by Beirut for 'An Exhibition and Other True Stories' (22 September-17 November) among other Unexpected Encounters at Camera Austria in Graz. 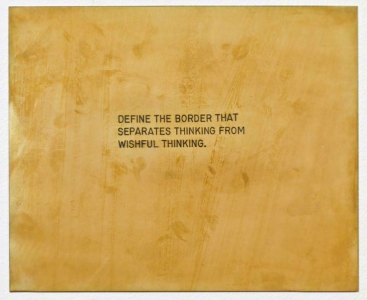