We are pleased to invite you to an evening dedicated to renowned Egyptian artist Wael Shawky, during which we will premiere his film "Al Araba Al Madfuna" (Part 1), shown in Egypt for the very first time, and launch the book "Wael Shawky: Al Araba Al Madfuna" through a conversation with the artist, curators and contributors to the book, on Saturday, 8 February 2014, from 19:00 to 21:00.

"Wael Shawky’s film oeuvre is remarkably impressive due to its consistent development and extraordinary precision: His re-performances of historical and political events ignite unconventional perspectives, which exceed reflections of Egyptian societal structures. He creates images that are crafted with technical mastership and therefore induce an immediate persuasiveness."

These are the words of the jury of the Ernst Schering Foundation Award 2011, who granted Wael Shawky with the award that comprised 10,000 Euros, a solo exhibition at the KW Institute for Contemporary Art in Berlin, and a publication. Through this award, Shawky realized the first part in a new series of film works "Al Araba Al Madfuna" (2012). The film, shot with children in Upper Egypt, is based on a story by Egyptian novelist, Mohamed Mustagab. The film was premiered at his solo show "Wael Shawky: Al Araba Al Madfuna", curated by Susanne Pfeffer, which took place at KW August 26–October 21, 2012. The book "Wael Shawky: Al Araba Al Madfuna" (2014) is the artist's first monograph in Arabic and in English, featuring his past and present projects, and includes interviews and essays by Carolyn Christov-Bakargiev, Heike Mertens, Jessica Morgan, Susanne Pfeffer and Sarah Rifky.

The night will commence with an introduction by Heike Mertens (Ernst Schering Foundation), and Sarah Rifky (Beirut), followed by the screening of the film, and a conversation between Susanne Pfeffer (Kunshtalle Fridericianum, Kassel) and Wael Shawky on the exhibition and the artist's practice.

The event will be in English, and Arabic translation is informally available on request.

Refreshments will be served.

Based on extensive periods of research and enquiry, Wael Shawky’s work tackles notions of national, religious and artistic identity through film, performance and storytelling. Whether instructing Bedouin children to act out the construction of an airport runway in the desert or organizing a heavy metal concert in a remote Egyptian village, Shawky frames contemporary culture through the lens of historical tradition and vice versa. Mixing truth and fiction, childlike wonder and spiritual doctrine, Shawky has staged epic recreations of the medieval clashes between Muslims and Christians in his trilogy of puppet animations – titled Cabaret Crusades: The Horror Show Files (2010), The Path to Cairo (2012) andThe Secrets of Karbala (2014) – while his two-part film, Al Araba Al Madfuna (2013), uses child actors to recount poetic myths, paying homage, rather than mere lip-service, to the important narratives of yesteryear. 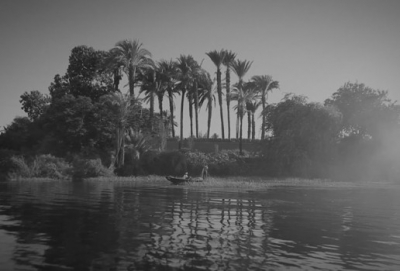