Tracing Our Dragon’s Smell is the 2015 senior student exhibition of the Visual Cultures program at AUC. The exhibition presents fifteen projects created through a year-long process that started last semester (Fall 2014, ARTV 4269). The initial research-based process is continued in the spring semester (Spring 2015, ARTV 4270). Here students primarily work toward finalizing their research outcomes into art works. This final production phase, along with the first semester of research, is an integral part of the educational process.

Tracing is an act which motivates us to detect or try to prove the existence of something unknown. Applied to a creative idea, one which may suddenly and seductively appear and disappear in our mind, tracing involves the instinctual desire to follow its multiple associations and find what remains of it in our memory. The pace of this process changes throughout its various stages, shifting as different areas are accessed that were not known before. Similar to brainstorming as a learning methodology, in which numerous divergent threads of an idea are followed, reaching a definite result is often uncertain. The challenge is therefore to work through a large network of collected information and attempt to create a simple theory that unifies its elements.

Art is a massive and mysterious entity that confounds our senses and confuses our efforts to trace its impact. Constantly shifting and unpredictable, it combines all contradictions: the weight of mountains and the lightness of flight, innocence and spontaneity, realistic appearance and magical disappearance, amiable cartoon characters and destructive monsters with devastating flames of fire. In brief encounters, art overwhelms us with its immense expanse and its brilliant glare leaves us at a loss and in a constant state of questioning. It may appear again and again, coming from its world in our imagination and returning to us in moments of awe and wonder.

Our new Visual Arts program offers an integrated curriculum within a liberal arts context. It combines an interdisciplinary approach to art in a larger cultural sphere, with tools and methods borrowed from other disciplines such as the sciences, sociology, anthropology and history. The program is oriented toward visual research and production grounded in an exploration of creativity and a critical approach toward art and culture. The current senior year exhibition showcases one of the first and early outcomes of the new curriculum. Students have adopted a process-oriented conceptual approach and developed a variety of visual and performative languages in their multi-media work. 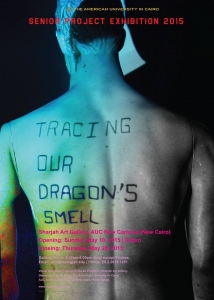