The National Library and Archives of Egypt is a government research and cultural non- profit authority, whose main concern is to render library services throughout Egypt and the Arab World.

Our authority was established as an independent legal entity by virtue of the presidential decree No. 176 for 1993, with an allocated budget including detailed items for each of its activities as specified by the standards of State Master Budget. NL's premises, a 7-storey building over- looking the Nile Corniche in Ramlet Boulac District, has been intended from the very beginning to be a large complex for a variety of cultural activities. However, the annex building is now accommodating the National Archives.

- To make available all facilities necessary for getting acquainted with the world intellectual production and to render library services for that purpose.
- To take an integral part in the revival of the intellectual heritage by collecting originals thereof, and to assist in making these available for scholars and researchers.
- To collect, maintain and edit all possible manuscripts, microforms, photographs, recordings, and make these available for research purposes.
- To collect all documents pertaining to national history and any other relevant subject matter in all ages, and to prepare and to maintain these for general use.

All activities launched by NLA are properly assisted by the NL's press which is not only responsible for printing of legacy books, but also for the books edited by our research centres. Through more active interest and participation in the national guidance, the National Library must also keep up-to-date with relevant social, economic and technological developments so as to be responsive to the demands of the general public and clientele groups, in addition to cooperating with other institutions of the Ministry of Culture

The National Library, the oldest government library, houses several million authored and translated volumes covering nearly every field of knowledge, and possesses in addition a vast variety of Arab and other oriental manuscripts. Collections of references open to the public. User needs only a "Reader's Pass" in order to use the readings rooms and consult the catalogues on the NL's premises. The public libraries spread throughout Greater Cairo, and our fleet of Mobile Libraries are responsible for rendering services free of charge to the general public, children, and scholarly community. All users have free access to such facilities and can borrow books.

On the academic level, the National Archives, with its immense variety of documents relevant to the history of Egypt, also renders services free of charge to researchers, scholars, university professors, and to those engaged in the work on political and social history of Egypt. The National Library and Archives of Egypt is one of the oldest libraries in the Middle East and its importance lies in having about 55.000 of the most significant collections of manuscripts and microforms in the world which are rendered in Arabic, Turkish and Persian languages.

These rare collections of manuscripts include a wide variety of the Holy Koran (Qur'an), whose early versions are written on paper and parchment, others are in the early undotted Kufi style. Among them are copies written by celebrated calligraphers as Yaquote-al-Mosta? asimi. In addition, there is a magnificent collection containing the largest and most richly illuminated versions of the Holy Koran copied in the Mameluke Text-hand, Trilinear and Rayhani writings.

The National Library's collections also include a wide variety of the most valuable manuscripts in various fields of knowledge such as general information, religion, scientific heritage and literature, amongst which is a unique book entitled as (the Message) by Al-Emam-al-Shafi'ai tackling the principles of jurisprudence, and dating back to the third, fourth and fifth centuries, were privately owned by Taymour Pasha, Ahmed Zaki Pasha, Ahmed Tal'aat Bey and Mustafa Fadel, then successively acquired and added to the National Library's stock at the end of the nineteenth century.

Other collections contain rare Persian manuscripts, some of which are beautifully illustrated by famous Persian painters, like Bostan Sa'adi illustrated in 893 H. by Behzad who was entitled as Raphael of the East, also like Shahnama (Book of Kings ) by Ferdawsi and Hayder Nama in 416 H.

Ottoman Turkish manuscripts date back to a few centuries ago and represent an important heritage for the Middle East area.

Also, the Arabic papyri collection, discovered at the end of the nineteenth century and amounts to 3.000 papyri, are written in both Arabic and Greek. The majority of such manuscripts are in Arabic and the earliest of which dates back to 22H, and represents invaluable treasure for those who study the development of Arabic calligraphy as they are rich in information about the economic life in Egypt and include deeds of sale and purchase, marriage lines and title-deeds that extend from the Amawi period to Fatimid period.

Moreover, the National Archives has a wide variety of documents in English, French and Italian languages. These collections, which cover the 19th. and 20th. Centuries are very important for conducting substantive researches and studies on the history of Egypt Arab World, Africa and their relations with Europe.

Our Library collections are of significant nature as they represent an essential part of the human heritage. All of these have helped to build the NL's outstanding local and international reputation.

The National Library and Archives comprises a number of research centers, such as: the Center for Editing & Publishing Arabic Manuscripts,the Center of Documents and Contemporary History of Egypt, the Computer Center, the Documentation and Research Center for Children's Literature and the Restoration Conservation & Microfilm Center, which has recently been provided and equipped through a Protocol of Cooperation concluded between Egypt and the Kingdom of Spain whose cooperation and understanding are thankfully appreciated. Infrastructure works at the NL's premises were mostly financed by the Egyptian Cultural Development Fund.

The National Library and Archives has recently been honored by Mrs. Suzanne Mubarak inauguration of the first phase of development of (15) research and reading halls. With the inauguration of the NA's (3) halls occupying a total area of 1.000 sq.m.,NL's (12) halls occupying a total area of 6.000 sq.m, assuming extensive reorganization and develo- pment of our premises, we can safely claim that our library services will soon be brought in line with international levels and we will spare no effort in meeting our users' expectations and needs.

In pursuance of the NL's policy for the dissemination of Arab culture and fulfilling the requirements of research activity, priority is given to edit, reprint and introduce to as many readers and researchers all over the world to legacy books as possible, as well as edit and publishall documents relevant to the history of Egypt. 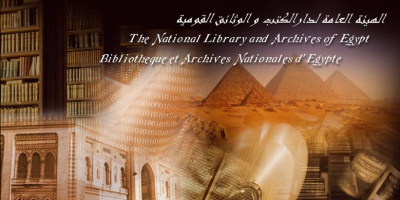