Marwa Maziad will deliver a lecture titled, "Oscillating Civil-Military Relations in the Middle East: Egypt, Turkey and Israel. Towards an Understanding of the Regional Order."

While historical, cultural and societal legacies in each of these countries have positioned the military to play a formative role in the foundational narrative of each case, this talk argues— beyond that given— that an additional layer of a regional dynamic pushes for perpetual oscillation of civil-military relations within each country, and for the non-consolidation of stable civilian supremacy over the military in any of them. For the military in each of these cases responded to a) surrounding regional militarism and/or b) domestic religio-nationalism. The talk examines the seesaw dynamic among the three cases within a Regional Order and delineates how and why threat perceptions have influenced civil-military relations— domestically.

Maziad is a fellow in the Middle East Center at the Jackson School of International Studies at the University of Washington, Seattle and a fellow at the Inter-University Seminar on Armed Forces and Society (IUSAFS) at Loyola University, Chicago. 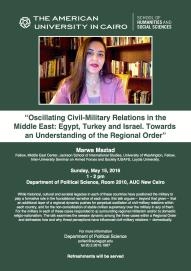